The part of my costume that I’m most proud of, by far, is Rey’s staff. This is easily the first thing that every single person, old or young, male or female, notices when I’m trooping. I absolutely delight in the looks of awe when people ask to see it up close and hold it.

When I first planned my costume, I had considered not even building a staff; it isn’t technically required by the Rebel Legion for costume approval, after all. But after seeing photos of other badass Reys wielding their staffs at troops, and, quite frankly, realizing that I wouldn’t have anything to do with my hands, I decided to take the leap. And I am so glad I did.

Clocking in at about 6’4”, my staff is made of a 1” wooden dowel core, 3D printed pieces, spray paint, leather and fabric. It took me hours of painting and gluing and sawing spread across about four weeks. It’s solid, heavy, and thanks to the weathering technique I discovered when I sponged bronze paint onto the finished edges, looks super realistic.

To start, I knew from the Rey Cosplay Community group on Facebook that my options for the staff base were either a 1″ wooden dowel or a PVC pipe. Some that had gone that route said the PVC was bendy, so I opted for wood. After learning they don’t sell 1″ wooden dowels over 6 feet tall (and also conceding that I should probably be able to break the thing into two pieces for easy travel), I settled on two 4′ tall dowels that I shortened and connected with a little ingenuity and some help from my papa.

I’d seen many of my Scavenger Sisters succeed with 3D printed pieces from a variety of sources, and ultimately ordered my pieces from the father of one of the group members. Bonus: he lives near the talented woman who made all of my leather pieces, and she was able to ship everything together to save on costs! Sweet! 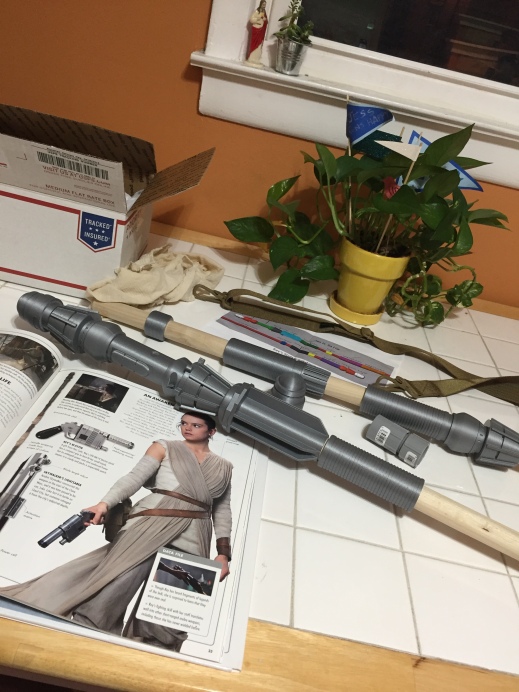 I’d heard horror stories of other Reys having to sand the hell out of their printed pieces and/or their dowels in order to get them to fit, but by some miracle, I did not. They slid right on seamlessly. And after some checking and re-checking of the handy-dandy color coded guide (in the photo above) and creating a cat-safe space for my pieces to dry in overnight, I had Gorilla Glued all the parts on and moved on to connecting them. 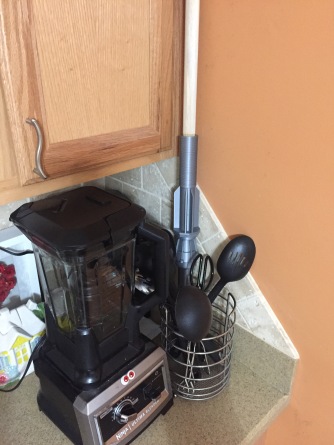 In Home Depot, I wandered the plumbing aisle in search of a metal connector set that I could attach to either end of the break in the middle. When an employee saw my furrowed brow and asked if he could help, I told him what I was doing. To his credit, he excitedly explained that I should probably go for plastic connectors because they’d be easier to anchor into the dowel by Dremeling screws through them and into the wood. BRILLIANT!

To start the process, I Gorilla Glued the connectors to the edges – they were 1″ connectors, but physics being what they are, of course they were larger than the dowel, and needed some stuffing and propping to keep from wobbling. The glue was really just extra insurance, after all, since I planned on using the Home Depot employee’s idea and also screwing them in. You can see the fabric stuffing sticking out in the photo above. 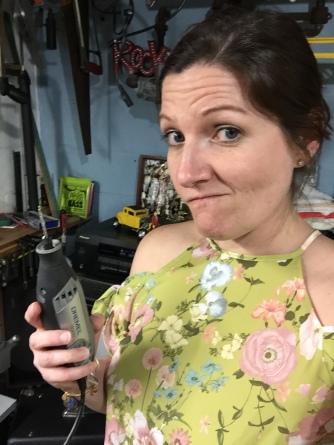 Once the glue had cured for a full day, I asked my dad if he could show me how to use his Dremel tool, and he obliged – in the half hour before we took him out for his birthday dinner! It was fun learning some new skills and working together with my dad to create this piece of my costume. He was so sweet, asking me if this was for “coz??” Turns out he’d asked his friends if they’d heard of this thing and misunderstood when someone explained to him what “cosplay” is. *squee* 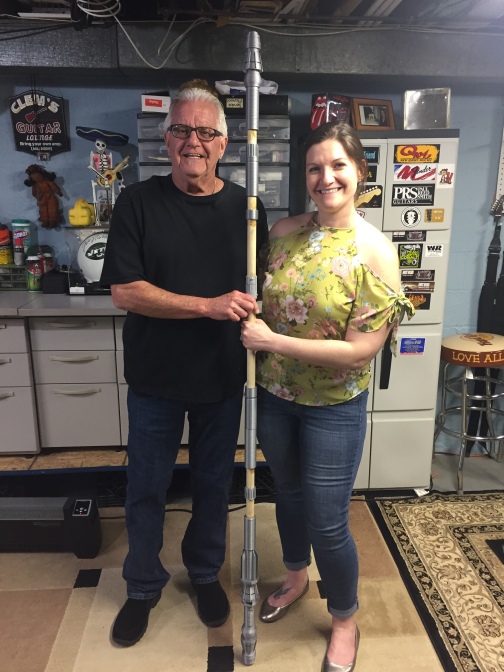 The result still looked kind of janky, but later that week the weather finally improved and I was able to move onto the next step: painting!

This is another place where I learned from the Reys that had come before me. I was totally unaware of things like textured spray paint until I joined the group, but after one helpful Rey took a snapshot of all the paints she’d used in the layers of her build, I literally went to the spray paint aisle with that picture on my phone and grabbed all three cans.

I started with a black, then added a textured silver/gray, and lastly added another kind of textured paint with a dull sheen to it that ended up looking quite metallic.

To weather it, I experimented with some techniques before sponging bronze acrylic paint my father had lying around onto just the edges of the entire staff in uneven strokes. The result even had my mom asking me, “Wasn’t that wood a few hours ago? How is it rusted metal now??” 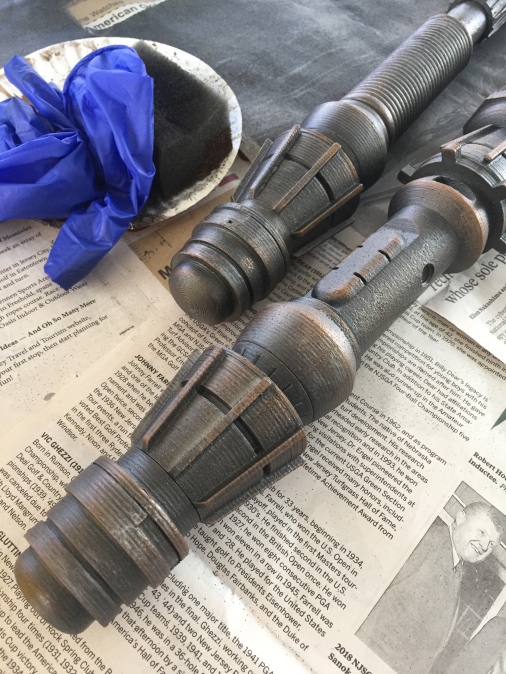 I was over the moon excited to have it looking so great. The only thing I had left to do was add the finishing touches of fabric, leather and the strap.

The fabric was just some were just some leftover gauze scraps I had lying around from my wrap dress and cutting the sleeves of my shirt. I used some movie stills as reference photos to find their placement within the 3D printed pieces and figured out a process of hot glueing the base, then wrapping, glueing, wrapping, and so on.

The leather was an easy find at AC Moore: two thicknesses of leather cording that I used the same process as the fabric: anchor, glue, wrap, repeat. Once everything was set, I busted out the eyeshadow and “weathered” the whole shebang by sloppily brushing brown and black eyeshadow all over the fabric.

Finally, the strap was an Amazon purchase recommended to me – yet again – from other Reys who had been RL approved. The only thing I had to was paint the metal details on it with some black acrylic paint I had from old crafting projects, and purchased a pair of the handmade leather strap connectors from a fellow Scavenger Sister and *voila*!

At my first troop, I walked into the changing area and found a handful of guys suiting up in custom-built Stormtrooper kits with dozens of pieces and insanely detailed craftsmanship – yet they stopped in mid-sentence when they saw my staff! These guys put weeks or even months into their armor, and they were oohing and aahing over my build? Talk about an ego boost!

Even Leia had to get in on the quarterstaff action!

After that, every person who showed up to troop with me that day had to get a good look at it. Every shy child who was too scared for a photo turned into a beaming Jedi-in-training when I’d whisper “Would you like to hold my staff?” and they wrapped a little hand around it while I held it safely above without them seeing. At a slower troop last weekend, I got into more conversations with passing adults about how I made the staff than I took photos with kids!

Ultimately though, I wouldn’t have it any other way. I am probably the least adept at tools, building things, and generally being handy. So this was a huge project for me and one that I’m super proud of. I’d wear the damn thing to work if I could. If I can build it, you TOTALLY can! Let me know how you fare if and when you take this project on, I’d love to see your progress!